In 1972, the United Nations Educational, Scientific, and Cultural Organization (UNESCO) adopted the World Heritage convention with the goal of identifying cultural and natural sites of "outstanding universal value" around the world. These sites — ranging from the Galápagos Islands to the Great Wall of China — must each meet one of 10 selection criteria, making them the world's most important historical, natural, and cultural places.

Of course, an official UNESCO designation is a sort of tourism stamp of approval; new sites are almost guaranteed an influx of travelers, money, and — hopefully — funding for preservation. Generally, the commission names a selection of new sites each year, but the global COVID-19 pandemic prevented members from meeting in 2020. So, in 2021, two years of nominations were considered across digital meetings; and 34 spots (the third-highest number ever) were named — 80% of which are in Europe and Asia. While all of the newest UNESCO sites are worthy of exploration, here are five that we’re the most excited about. 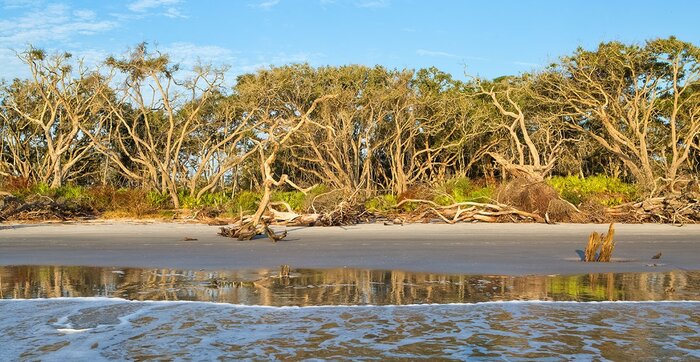 Test your knowledge!
Jekyll Island is part of which U.S. state?

France’s last inhabited lighthouse, the majestic Cordouan Lighthouse, dates to the turn of the 17th century. The structure — composed of stately white limestone — is located on a rocky outcropping at the mouth of the Gironde estuary, in the rough waters of the Atlantic Ocean. Its elaborate, Renaissance-style appearance — featuring gargoyles, tiled floors, and a spiral staircase — are juxtaposed by the surrounding dark, turbulent waves.

Originally designed by architect Louis de Foix, the Cordouan was remodeled by Joseph Teulère at the end of the 1700s. He heightened the structure and made important adjustments to its light chamber, making the lighthouse an important technological achievement for its day.

According to UNESCO, the structure’s aesthetics and functionality embody “the great stages of the architectural and technological history of lighthouses,” and reflect “the tradition of famous beacons of antiquity” at a time when there was a renewed interest in maritime navigation.

The Rudreshwara Temple is more commonly known as Ramappa Temple, but Marco Polo referred to it as the “Brightest Star in the Galaxy of Temples.” Whatever you call it, this walled complex of ornate sandstone buildings is a historical treasure. Dating to the Kakatiya dynasty from about 1123 to 1323, the site is located in Palampet, a village about 125 miles northeast of Hyderabad.

And it sure is ethereal. The main temple, dedicated to Lord Shiva, took some 40 years to build and features decorated pillars of granite and dolerite topped with a distinctive, pyramid-like tower called a vimana. A series of sculptures also decorate the walls and grounds, depicting regional customs and cultures. Under all the decoration, the temple’s walls were constructed with porous “floating bricks” — reducing the overall weight of the structures.

Even the temple’s idyllic location reflects the culture and time period. Texts from the era dictate that temples are to be constructed in harmony with the hills, forests, and waterways at the site. And from the Ramappa, visitors can take in sweeping views of foothills, forests, and farmland.

From its founding in 1897 to 1914, the Darmstadt Artists’ Colony in Mathildenhöhe was one of the most important centers of modern architecture and art in Europe — if not the world. Located on a hilltop above the German city of Darmstadt, the colony was established by Ernst Ludwig, the Grand Duke of Hesse, in 1897. He intended the community to be a center for emerging movements in architecture, arts, and crafts — a project inspired by the Industrial Revolution, the Arts and Crafts Movement that countered it, and the optimism of the early 20th century.

The structures — early Modernist-style living and working spaces — were designed and built by artisan members of the colony. According to UNESCO, the complex is a testament to early modern architecture, urban planning, and landscape design. Crucially, the design and output of the colony also fueled the Bauhaus Movement.

There are 23 landmarks on the property, including the monumental Wedding Tower and Exhibition Hall; the Russian Chapel of St. Maria Magdalena; the Gottfried Schwab Memorial; and a series of gardens, groves, fountains, and pavilions — all surrounded by housing and studio spaces for affiliated artists.

The islands of Amami Ōshima, Tokunoshima, Okinawa, and Iriomote are located in the South Sea and are part of a critical ecological region referred to as an “evolutionary jewel box.” Largely uninhabited, the UNESCO-designated lands encompass nearly 165 square miles of subtropical rainforest across a chain of islands in southwestern Japan.

The islands are located on the boundary of the East China and Philippine seas and are home to a number of endemic species that can’t be found anywhere else on Earth. Many of these animals are threatened or endangered, including the Amami rabbit, the Ryukyu long-haired rat, the Iriomote cat, the Lidth’s jay, and the Okinawa rail.

Some of these creatures represent ancient lineages with several identified as Evolutionarily Distinct and Globally Endangered (EDGE) species. The amount of biodiversity is unique to each island, and the group is one of just five natural properties added to the UNESCO World Heritage list in 2020 and 2021.

UNESCO defines the famous porticoes of Bologna as “an expression and element of Bologna’s urban identity.” Specifically, UNESCO designated 12 of the most representative sections of the city’s porticoes — dating from the 12th century to the present and spanning almost 40 miles.

Constructed of wood, stone, brick, and reinforced concrete, the style, construction, and usage of the various porticoes don’t just shelter roads, public squares, and walkways but serve to reflect the city’s long history. Though not necessarily a part of a comprehensive covered system, these designated spaces shelter pedestrians from rain and extreme heat, offer space for merchants and artisans to sell their wares, and create space for dining al fresco.

Bologna is famously the most “arcaded” city in Italy, and its proliferation of porticos dates to around 1100, when the city’s university — the first in the western world — was founded. Naturally, many new residents were attracted to the city from all over Europe, so new spaces were needed to house and serve them. To do so, the upper floors of buildings were expanded outward over existing pathways. These new rooms were supported by pillars that formed the porticos that ultimately sheltered walkers, makers, and even students needing a place to crash for the night.

6 Foods Everyone in Canada Loves

7 Unique Bridges You Can Drive Across

6 Lesser-Known Mountain Ranges in the U.S.

6 Foods Everyone in Canada Loves

7 Unique Bridges You Can Drive Across

6 Lesser-Known Mountain Ranges in the U.S.