When you think of Japan, a number of images likely come to mind. The Land of the Rising Sun is the home of sakura blossoms, Mt. Fuji, and of course, sushi. It’s also home to the kimono. If you’ve ever wondered how the elegant article of clothing became so iconic — or if you’ve ever been tempted to try one on yourself — here’s a brief history of this unique garment. 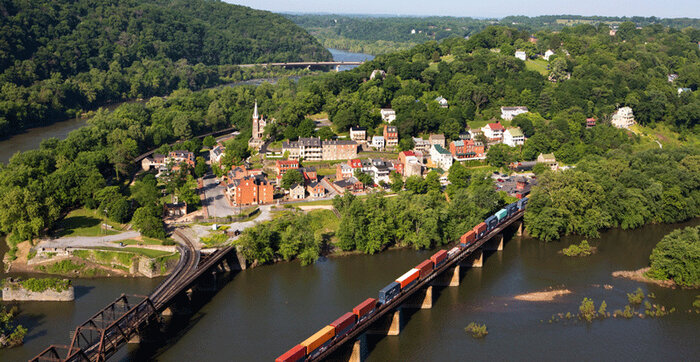 Test your knowledge!
What is this historic site where the Potomac and Shenandoah rivers meet?

Let’s start with the name. In the same way that sake is actually the Japanese word for alcohol, kimono simply means “thing worn” and was originally a catch-all term for clothing; it didn’t take on its current definition until the 19th century. Dating back more than 1,000 years, with most sources pointing to the Heian period (794-1192) as the era in which it became the fashion statement of choice, the traditional robe has long been an instantly recognizable symbol of Japan.

So how did it become so widespread in the first place? The short answer is practicality. That Heian period was when the straight-line-cut sewing technique was developed, thus changing fashion in Japan forever. This new method allowed for versatile garments that were essentially one-size-fits all, easily foldable, and as suitable for warm summer days as they were for cold winter nights.

It’s easy to see why this all-purpose article of clothing became so popular, especially given how economical it was. This simple kimono eventually gave way to the layered variety. This allowed people to get more creative with color, which until that time usually represented either the time of year or political class to which the wearer belonged. This led to a veritable explosion of hues during the Kamakura (1192-1338) and Muromachi (1338-1573) periods, when bright colors were all the rage — including on the battlefield. As for the name, what we now call a kimono was known as a kosode, which means small sleeves, during the Edo period (1603-1868).

End of an Era

If you know anything about the Meiji period (1868-1912), you know that it was when Japan became heavily influenced by western culture. This represented the true end of an era. Japan, an isolated feudal state for centuries, became a rapidly industrialized and militarized nation-state — and, as the Empire of Japan, a genuine great power alongside the likes of the Ottoman and Russian empires. Suffice to say that these great changes affected how people dressed as well.

At first, the impact this had on the kimono was actually positive. The textile industry was hardly immune from modernization and the new affordability of synthetic dye meant that colors symbolizing wealth such as red and purple were no longer the sole province of the elite. However, this changed in 1871. Emperor Meiji issued a proclamation calling for European clothing to be worn by himself, his officials, and his entire court; the same went for the military, police, and postal workers. Few things mattered more to the Emperor than being comparable to western powers. You know what they say — clothes make the man.

They also make the woman, or so Meiji thought. Women were still encouraged to wear kimonos during this time of upheaval, creating a sartorial link between Japan as it was and Japan as it would soon be.

A person's kimono can say a lot about them: their gender, how old they are, even whether or not they're married (there are even wedding-specific kimonos). You can find them at secondhand shops or commission one for tens of thousands of dollars, depending on your budget and the occasion.

The most casual type of kimono, whether it is worn in the home or at a summer festival, is the yukata — a light cotton variant on the less ornate end of the spectrum. Worn by both men and women and translating to “bathing clothes,” this unlined kimono features wide sleeves and straight seams. Completing the ensemble are the traditional obi sashes, which are often tied like a bow on the back when worn by women, as well as wooden geta sandals and tabi socks.

Then there's the hōmongi (“visiting wear”), which is given to a bride upon marriage but can also be worn by unmarried women. As a semi-formal kimono, it’s usually less colorful than those worn before marriage and is always made of silk. Hōmongi act as a kind of replacement for furisode (“swinging sleeve”), the most formal kind of kimono worn by younger and/or unmarried women.

The long sleeves of a furisode are its most distinct feature. Some reach a length of 44 inches. Bright and often made of silk, they're worn at tea ceremonies, weddings, and Coming of Age Day — a holiday held on the second Monday of each January that celebrates those who reached the age of 20 between the prior April 2 and upcoming April 1.

Iromuji kimonos, however, are less ostentatious and their name (“solid color”) betrays their monochrome aesthetic and Edo komon, which features a small, white pattern on a colored background. There are many other kinds of iromuji — from the wedding kimono (shiromuku or “white pure innocence”) to the all-black mofuku worn for mourning and special occasions.

We live in an age of nostalgia, which is part of why the kimono is as recognizable as a symbol of Japan today as it would have been hundreds of years ago. While you might not find many people wearing them on the streets of Tokyo, they remain a vital thread in Japan’s cultural fabric.