Colorful images, gaudy illustrations, and beautiful scenery — wherever your travels take you, postcards are the first thing you see outside any self-respecting gift shop. Chances are, you’ve sent a few postcards yourself, detailing news of your exciting adventures to friends and family back home, and have heard about your loved ones’ vacations in return. But have you ever wondered how the postcard tradition came to be? 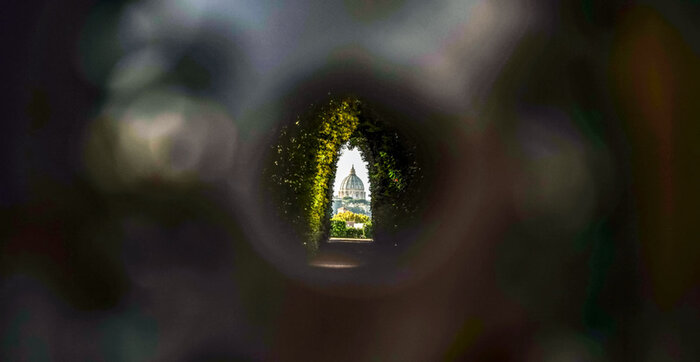 Notes with text and pretty pictures have been sent since humanity put pen to paper, but the postcard was born as a result of two key inventions: the postal service and the printing press. In the United Kingdom, the introduction of the Penny Black (the world’s first adhesive stamp) in 1840 meant that lightweight letters and cards could be mailed quickly and cheaply. A similar innovation happened in the United States in 1861, when Congress began allowing privately printed cards to be sent in the national mail.

The idea for a card that could be mailed without the use of an envelope was first proposed by Heinrich von Stephan, the general post director for the German postal service, at the 1865 Karlsruhe Postal Conference. His idea was rejected, however, as his colleagues did not believe that people would allow their private messages to be read by nosy postmen. Neighboring Austria took a similar idea and ran with it, introducing the Correspondenz-karte in 1869. The open card without an envelope, which cost half the price of an ordinary letter to mail, was a surprising success.

News From the Field

With the onset of the Franco-Prussian War in 1870, the Correspondenz-karte (and subsequent clones in other European countries) became an ideal method for soldiers to send rapid, inexpensive notes to those back home. They were essential for keeping soldiers’ morale high. That same year, the British Post Office issued their first official postcards, selling an astonishing 76 million of them that year. Britain wasn’t at war during that time, so it was mostly civilians who purchased them. With the introduction of the Bank Holidays Act in 1871, Brits flocked from the factories to the seaside, using postcards to tell family and friends about the jolly time they were having.

The U.S. government began printing postcards in the early 1870s. Many of these had images of notable sites on them, such as an engraving of the Capitol. Yet postcards back then were still little more than boring, brief memos — a far cry from the vibrant versions we’re used to today. It took the construction of a world-famous landmark for postcards to become the way to brag about one’s travels.

From Paris With Love

Picture this: You are at the opening of the Eiffel Tower for the 1889 World’s Fair. The word “Eiffel” is on everyone’s lips, and the people around you stop to crane their necks at the structure's full height. Naturally, attendees wanted their acquaintances to know they were present at this historic occasion, so special postcards, featuring an engraving of the tower by Charles Libonis, could be bought and even mailed from the Eiffel Tower itself.

The postcard mania continued into the next World’s Fair in Chicago in 1893. Forty-six nations set up stands to educate the 26 million fair visitors, many of whom may not have set foot outside the borders of their own state. Once again, the official postcards of the event — this time designed by Charles W. Goldsmith using new color-printing technology — were a smash hit.

Five years later, a German immigrant named Curt Teich arrived in Chicago. His family ran a printing press back in Thuringia, and Teich decided to set up his own company in the Windy City. However, competition was tough. Many of the great minds who attended the 1893 World’s Fair decided to stick around to see if they could make their own Chicago fortune printing newspapers. Searching for another niche, Teich saw an opportunity in the burgeoning postcard trade. He packed his camera and order pad, and hopped on a train to document the wonder of small-town America. For Teich, no town was too insignificant.

Developments across the pond helped Teich’s business. In the early 20th century, postcards had become wildly popular in Europe. They were cheap to send and could be delivered in a matter of hours, with as many as 12 postal collections a day in London. And as wealthier Europeans toured the world, postcards proved a handy way of communicating with loved ones at home. They also became a collector’s item, each new design adding to the treasure trove of an amateur collector. And in 1945, a new term was coined to describe the study and collection of postcards: deltiology.

The hype wasn’t to last, unfortunately. World War I, the Great Depression, and World War II put a damper on fun-filled vacations and leisurely pursuits. However, Teich’s business kept going and growing, as he sensed that postcards were more than just a passing fad. As a child, Teich would have been familiar with postcards emblazoned with the words “Gruss Aus…” ("Greetings From…") accompanied by an illustration of an idyllic German town. Teich, with his vast collection of images of various American cities, brought this same idea to the United States. The airbrushed images were distinctly American and played up to nostalgic, sentimental views of America unscarred by war and recession. Teich’s designs showcased each town’s main landmarks with each letter of its name, from its picturesque city hall to the spectacular waterfalls lying just outside city limits.

After the wars were over, Americans hit the newly opened Route 66 to explore all their country had to offer. Teich’s postcards were the perfect way to show off to the folks back home. Stocked in five-and-dime stores such as Woolworth’s, the postcards magnetically drew customers in. People loved that Teich had a design for seemingly every place in America — 150,000 are estimated to have existed.

By the 1960s, photographic postcards had overtaken Teich’s design as the most popular style of postcard in America. Postcards also became less useful as a rapid way of sending information, as other, quicker postal services (and even the telephone) had become household staples. Still, postcards remained a vacation tradition, one we continue to this day. From Lady Liberty to Nigeria’s blossoming cities, and everywhere in between, postcards are truly a global phenomenon.

The warm, fuzzy feeling we get upon receiving a postcard today is the same feeling people 150 years ago would have felt, seeing a colorful little card from somewhere far away arriving in the mail. But nowadays, we can send virtual postcards, personalized versions, and even 3D ones. Whichever style we choose, Americans still love them, as over 500 million were sent last year alone. Next time you travel somewhere new, pick up a few and send them to your friends — you might just spark a new appreciation of these humble, old-fashioned souvenirs.