In addition to popularizing perms and punk rock, the 1980s revolutionized the travel industry. By 1980, the jumbo jet had been around for 11 years and as the decade progressed, more Americans became accustomed to long-distance travel. Just as fashion went in and out of style, certain travel destinations saw a massive uptick in popularity during the decade. If you’re curious about the years gone by, here are eight vacation destinations that were trending in the 1980s. 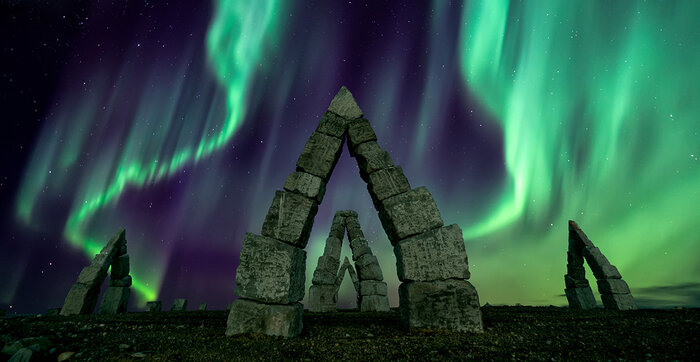 Test your knowledge!
Where is this arctic henge?

After the release of the movie Crocodile Dundee in 1986, Americans began flocking to Australia to see the rugged charm of Down Under for themselves. With the combination of affordable airfare and a great exchange rate, Australia was undoubtedly one of the hottest destinations of the decade. Much of this tourism growth was a result of a tactical campaign aimed at Americans, including Paul Hogan’s famous “shrimp on the barbie” television ad. As a cosmopolitan city located directly on the water, Sydney proved to be an especially popular spot for tourists.

In particular, The Rocks neighborhood in Sydney was up and coming in the 1980s, and as a result, this historic section of the city continues to draw visitors today with its historic pubs, designer boutiques, and upscale waterfront restaurants. Kakadu National Park, where Crocodile Dundee was filmed, also attracted visitors. At the time of the film’s release, most Australians hadn’t yet made the trek to the remote park in the Northern Territory. Since then, however, more substantial infrastructure has been built to accommodate tourists and an estimated 180,000 people visit Kakadu annually.

Although Portuguese sailors first landed on Madeira in the 1400s, this archipelago wouldn’t become a tourist hotspot for centuries. But as it’s ideally situated in the North Atlantic, Madeira was bound to become an in-demand tourist destination one day — especially for wine lovers. Home to century-old vines, the island is the only place in the world that produces the highly sought-after Madeira wine. Nonetheless, Madeira wasn’t on America’s travel radar until the 1980s. Its increased popularity as a vacation destination was due to the fact that the archipelago became autonomous in the late 1970s, which led to an increase in infrastructure and a latent tourist boom.

To add to the top-notch wine and stunning vineyards, tourists were drawn to Madeira’s warm weather, turquoise water, and jaw-dropping vistas of cliffs along the coast. More recently, the remote destination has had a bit of a resurgence. The upturn in tourism has to do with famed Manchester United football (soccer) player Cristiano Ronaldo, who hails from the capital of Funchal. True fans make the pilgrimage to the island to visit the Cristiano Ronaldo Museum, which houses all of his trophies and tells the story of the footballer’s life and career.

In the 1980s, Goa was a paradise for free thinkers seeking an alternative lifestyle. The Indian state first became popular with Europeans the decade prior, since it held few restrictions for locals and tourists. During this time, Goa became the place to visit for those looking to experience the counterculture of the 1970s. By the 1980s, more accommodations had been built for visitors, and since Goa had long been established as a renowned party hotspot, Americans began flocking to its shores. Above all else, Goa’s “full moon parties” — all-night raves on Anjuna Beach that led to the birth of trance music — attracted tourists who wanted to escape the rampant consumerism of the decade.

Since then, Goa has continued to be a popular beach destination, and the full moon parties still take place on Anjuna. However, after the government started to crack down on the state’s rules and regulations. As a result, the region doesn’t have the same free and easy vibe as its 1980s heydey, although it’s still a great place for those looking to partake in beach activities.

On July 29, 1981, Lady Diana Spencer married Prince Charles at St. Paul’s Cathedral — and so began a multi-decade fascination with the “people’s princess.” By 1983, Britain had received over 2 million American visitors who spent £784 million. While some of this success is attributed to marketing campaigns, much of it has to do with America’s obsession with Princess Diana, who reignited the nation’s interest in Britain’s royal family, historic landmarks, and pop culture. By default, London was most often frequented by tourists — it was here that Americans could see where Diana was married, tour Buckingham Palace, and see all of the city’s popular sites, including the Tower of London and Big Ben.

After her tragic demise, Americans still sought out places where Diana frequented, including Althorp Estate (her family home and where she was laid to rest) and Hyde Park, where visitors can spend time at her memorial fountain. Overall, 60% of overseas travelers to London will visit attractions that are associated with the royal family.

Although the early ‘80s drew over 300,000 college students to Fort Lauderdale, these numbers would drop to 20,000 students by the end of the decade. The reason for this nosedive was a federal law that increased the drinking age to 21 years, which turned college students’ attention to places with more lenient alcohol laws, such as Europe and Mexico. Today, Fort Lauderdale still attracts spring breakers, but it is mostly renowned as a beach destination for families.

By the 1980s, cruise ships had been employed by travelers for over a century as a way to get from Point A to Point B. And while leisure cruises had begun to grow in popularity in the 1970s, it wasn’t until the ‘80s that cruise ships became highly regarded by travelers. It was during this decade that the ship became a destination in and of itself, with vacationers choosing to “cruise to nowhere.” The birth of this phenomenon was a direct result of the mega-ship, a state-of-the-art boat introduced in the early 1980s that was able to accommodate the whim of every traveler.

The trend began with the SS Norway, which had its inaugural cruise in 1980. At 1,000 feet in length, the SS Norway boasted 12 decks filled with anything and everything a traveler could desire — bars, discos, a casino, live music and shows, television sets in every room, midnight buffets, saunas, whirlpools, and spas. In this way, cruises were able to appeal to a broad set of people, making it easier for families and groups to find satisfaction in a single destination. More recently, mega-ships have lessened in popularity, largely due to the Covid-19 pandemic. As a result, smaller cruise companies like Uncruise have introduced the “cruise ship of the future" with eco-friendly accommodations and a “slow travel” approach to itineraries.

Lake Placid was no stranger to the Olympic Games. After all, the small mountain town in upstate New York had hosted the games in 1932. So when it came time for them to host the 1980 Olympics, the Adirondack enclave rapidly increased its infrastructure in order to accommodate the masses. Despite this increase, Lake Placid lost none of its charms, which led to it becoming a top tourist destination of the decade.

In addition to skiing the slopes at Whiteface Mountain — which hosted the slalom, giant slalom, and downhill events — tourists gravitated towards the Olympic Center. Visitors were invited to take part in the Olympic experience by bobsledding a portion of the 1980 bobsled track or making the death-defying journey to the top of the Ski Jumping Complex. Although Lake Placid isn’t as currently in demand as it was in the 1980s, it’s still a draw for lovers of the Olympics. In 1994, an Olympic Museum was built to showcase the town’s Olympic history, and most recently Mount Van Hoevenberg welcomed the Cliffside Coaster, a combination skeleton and bobsled track beloved by adrenaline seekers.

West Berlin in the 1980s symbolized the division of the Cold War and played a significant role in global politics throughout the decade. As such, it was a sought-after travel destination by Westerners looking to partake in Germany’s “island of freedom.” Since it also was one of Europe’s most visible U.S. allies, Americans were emotionally invested in West Berlin. In addition to its legendary club and music scene, which drew the likes of artists and musicians such as the late, great David Bowie, most tourists flocked to West Berlin to see the notorious Berlin Wall.

While the blank Eastern side of the wall represented the Communist regime, the Western side was a modern art piece, covered with graffiti, artwork, and social statements. As a result, West Berlin was a magnet for creative people, emitting an electric energy that defined the city. But when the wall came down in November 1989, West Berlin changed forever. With Berlin becoming a unified city, the West Berlin of the 1980s was all but erased, only living on in artwork, photos, and the music it inspired.